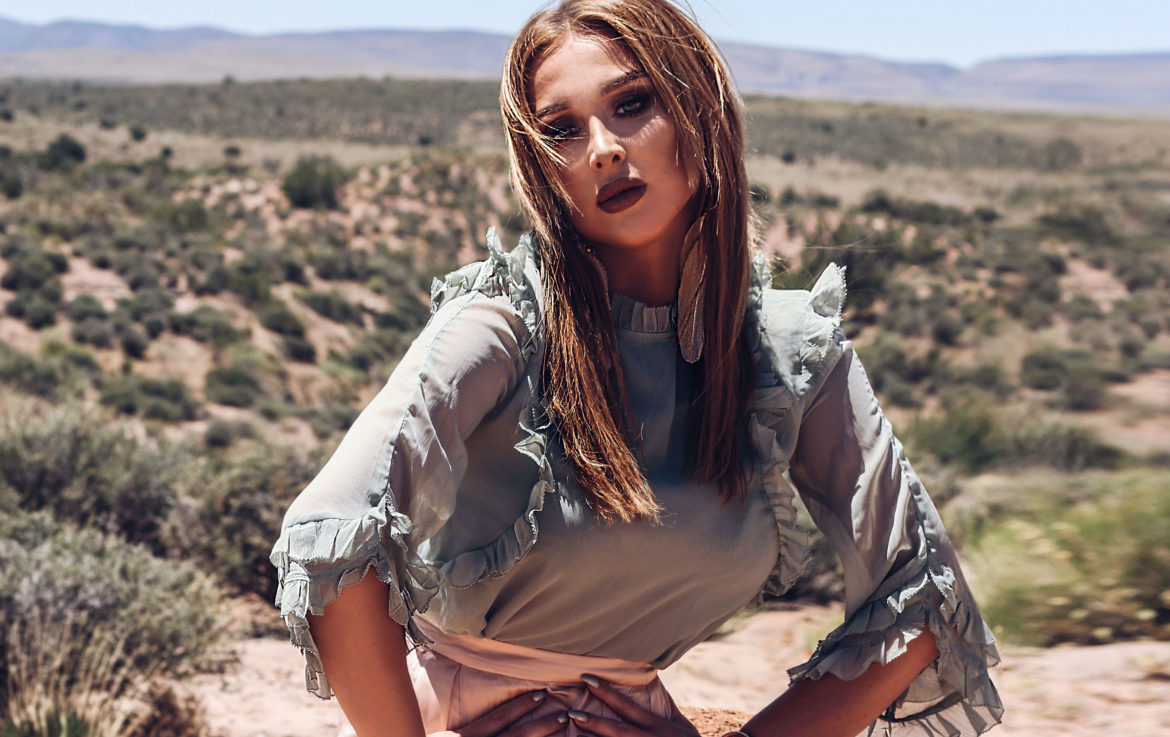 This summer I went to a large and beautiful Indian / Native / First People reserve in Arizona. We flew out to Vegas for my birthday and Arizona is quite close – so we decided to take this once in a lifetime trip to see the real Indian reserves and the Grand Canyon.

The colors there were insane, you just catch yourself constantly starring everywhere. And the width, meaning how far you can actually look, is so unusual too. In our crowded cities we are not used to look further than the next tall building and even if you have a view from the top floor it’s mostly still not in all directions.

It just looks like a postcard! Somehow I always thought it must look like this on pictures only because the colors are being enhanced in photoshop or taken from a certain angle – but there you go, the pic underneath was taken with my phone! 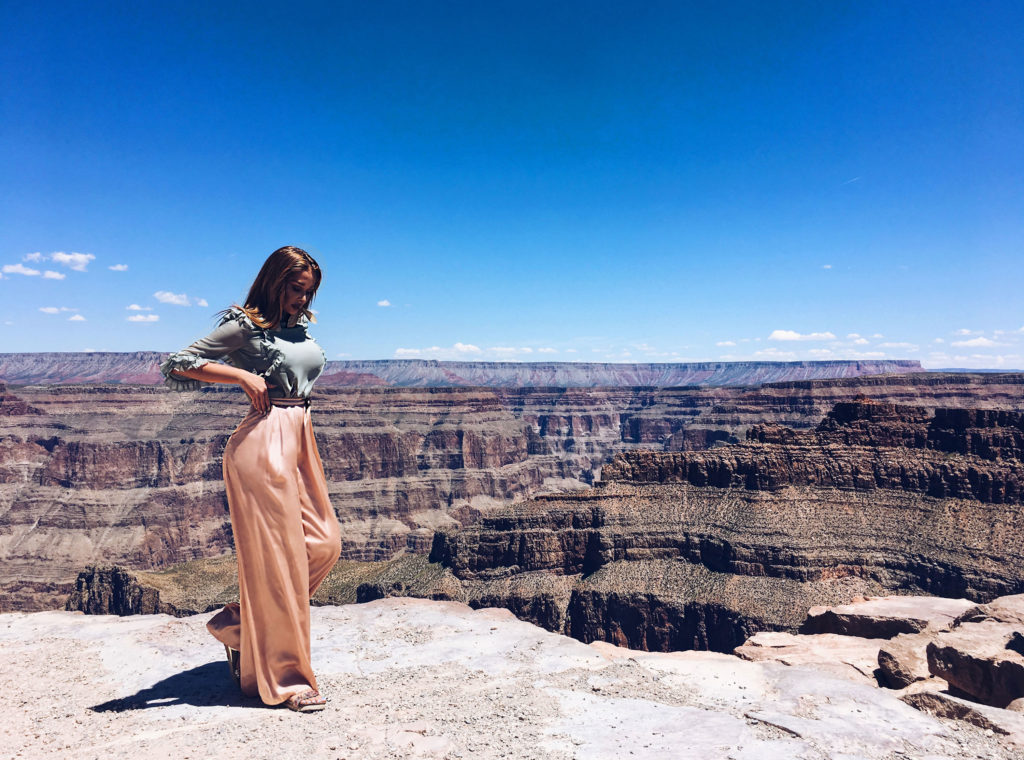 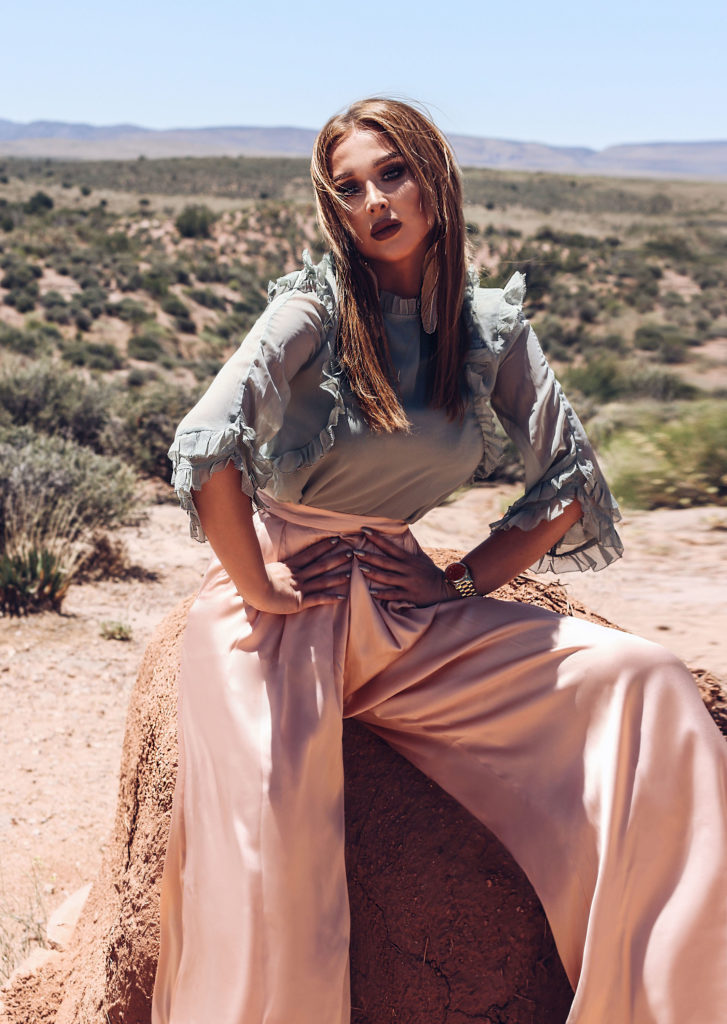 So somehow we even managed to shoot there 🙂 I couldn’t miss such a unique location where I maybe will never ever go again in my life. It’s really the wild wild west! I don’t know how I came up with this outfit idea – I was thinking of a “colonial style” and this top reminded me of those they used to wear back then when the first immigrants came to America. The wide silk trousers would go well with the wind and there were looooots of winds! That’s why you didn’t feel the heat at all and at times, especially in the shadows, it felt even very chilly.

This one is really one of my fav pictures ever taken! I love the pastel nude and subtile colors, this is so me! And the surroundings of course. What I like most are the harsh shadows that show how sunny and open it actually is – I never shoot in the sun normally.

I can’t stress it enough! Who gets to shoot in the desert of Arizona! It was also not a quick ride to get there from Vegas, it took us a couple of hours. Look how my watch blings! 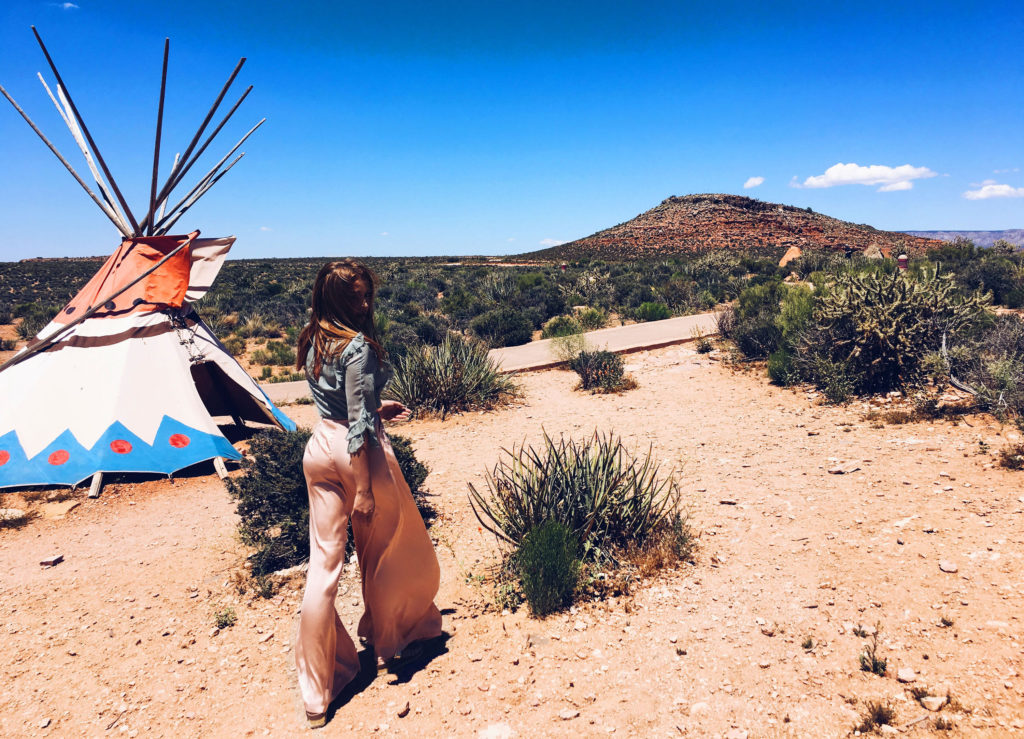 These are their actual tents! 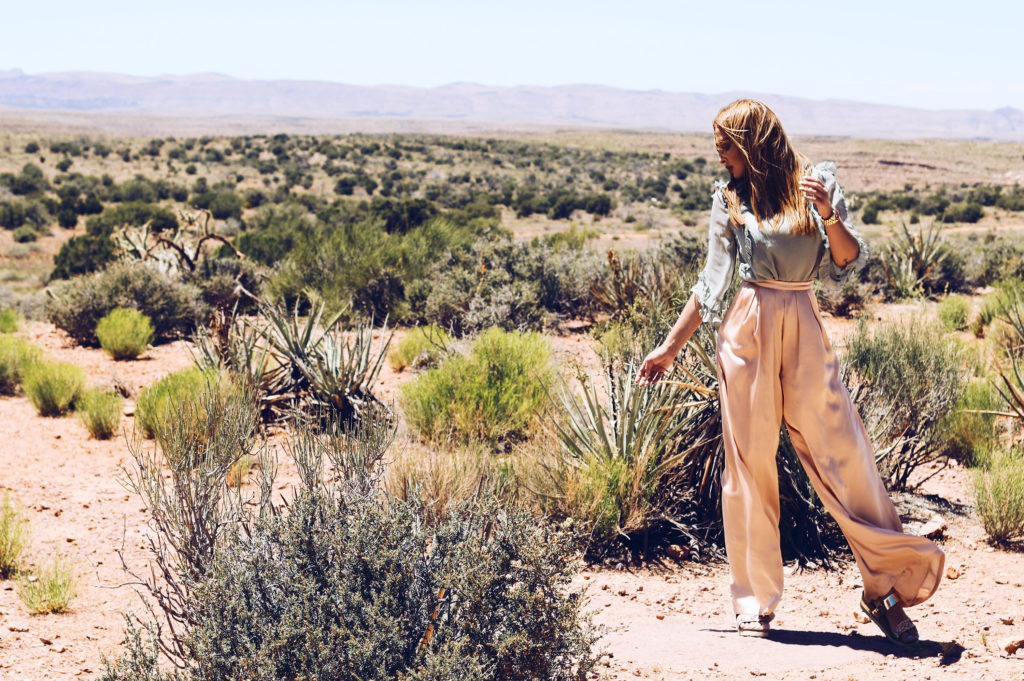 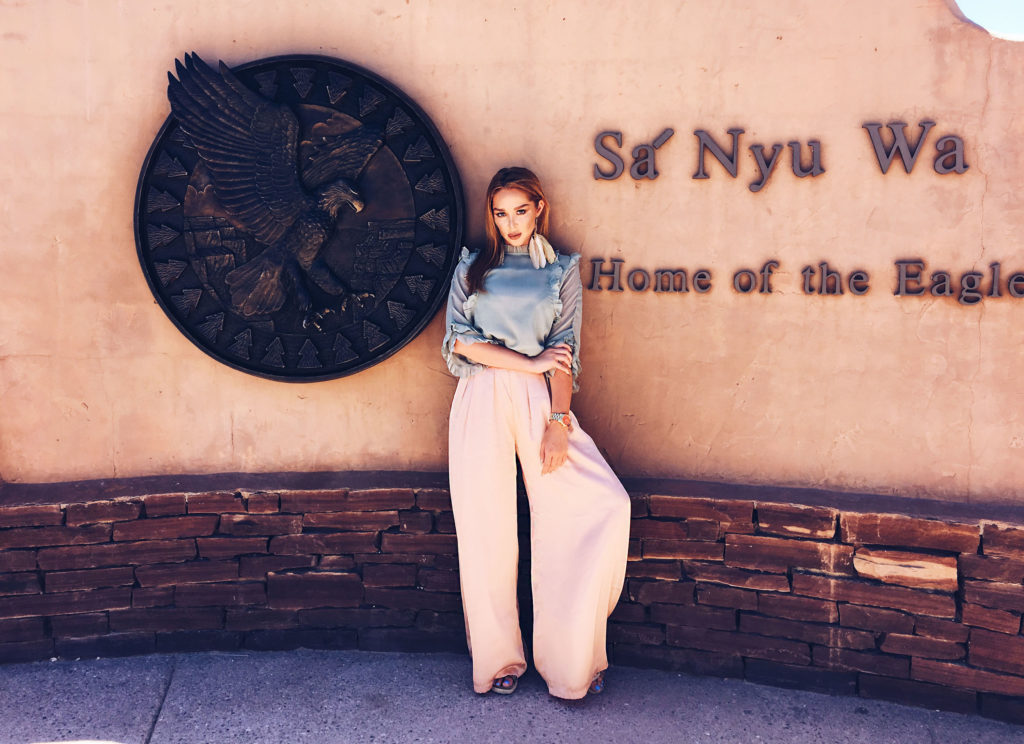 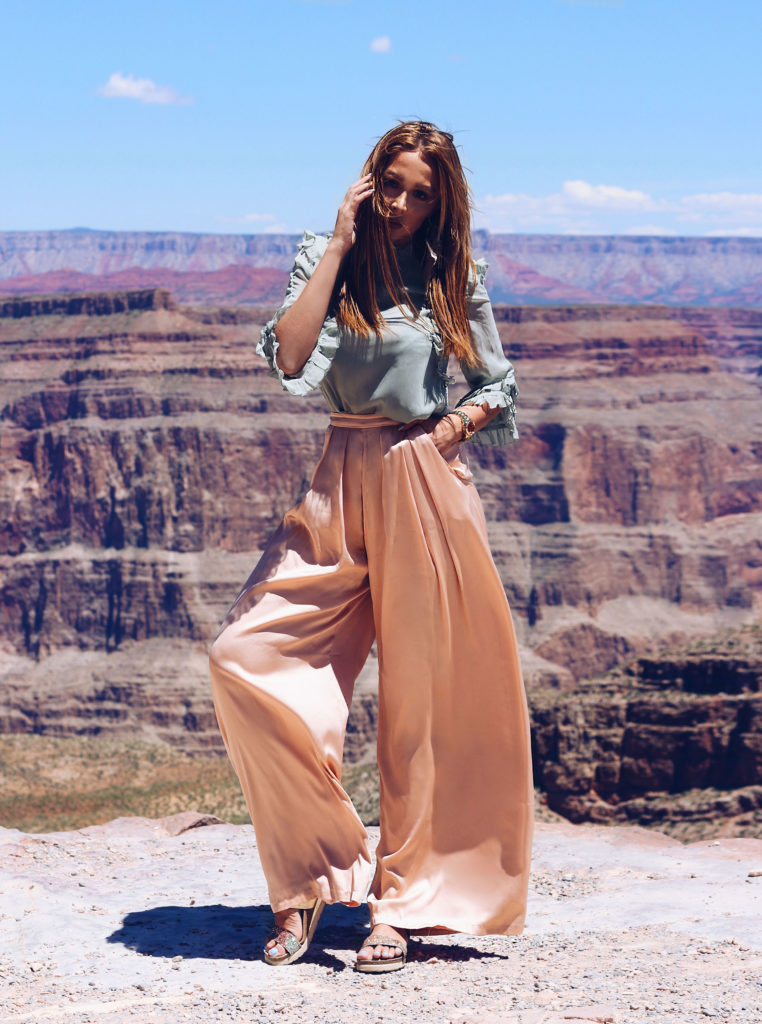 At times it might really look like you’re falling off the cliff but it’s actually not that close. The irony is even if you go very close it will still be looking the same in the picture. There are also many security guards standing close to you and watching out for you. 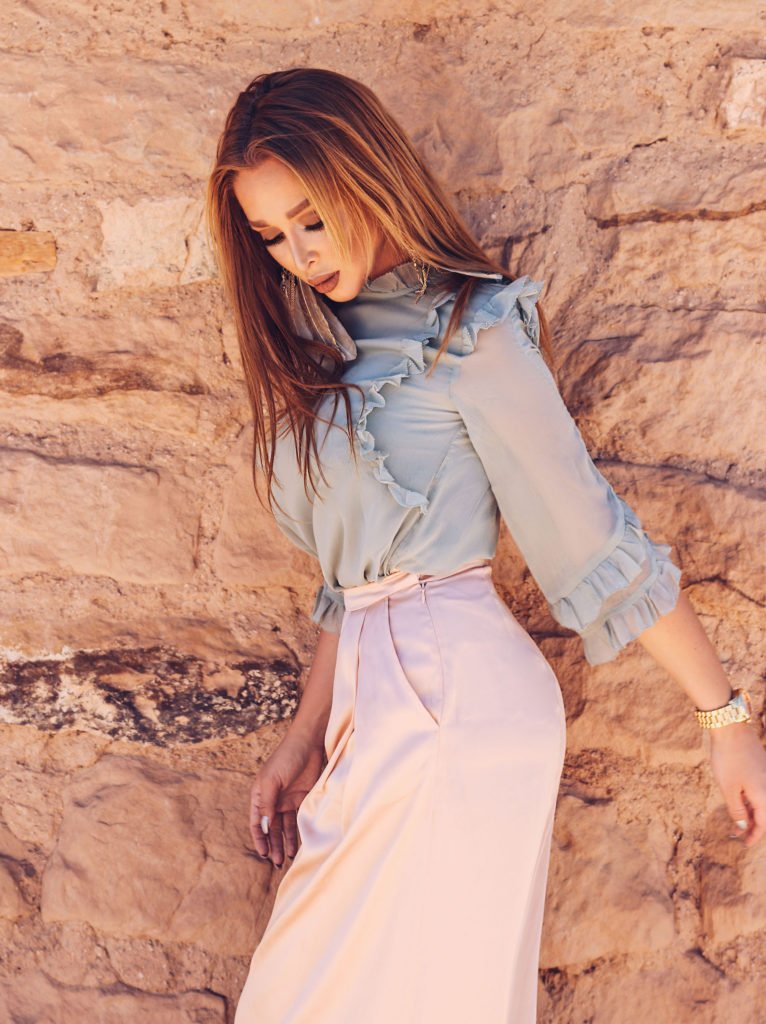 Honestly guys, there is such an amazing atmosphere of freedom in the air. I’ve never felt that human and good and free in any other place. There is a feeling of anarchy what I absolutely love. Legally it’s a state-in-state, meaning, it doesn’t belong to the USA and it obeys its own laws. But I’d rather obey their laws than the U.S. laws because they seem wiser and way more intuitive to me. This is what they told us before we came there, like “Watch out, you’re not under U.S. law anymore bla bla” but I experienced those people as very happy and in tune with themselves. Magical! 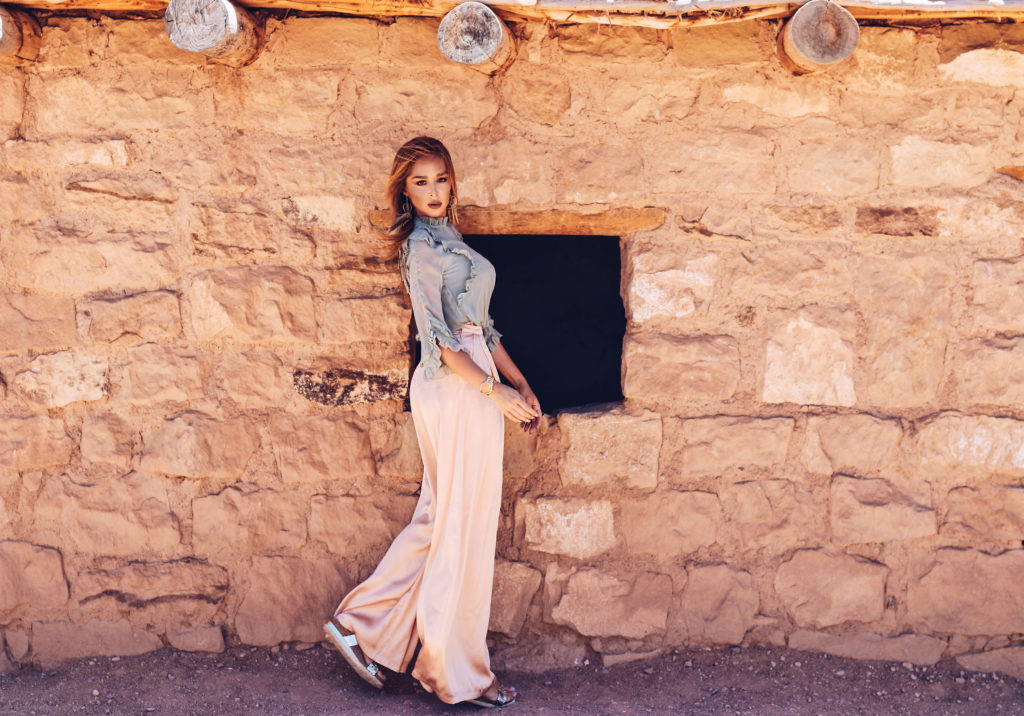